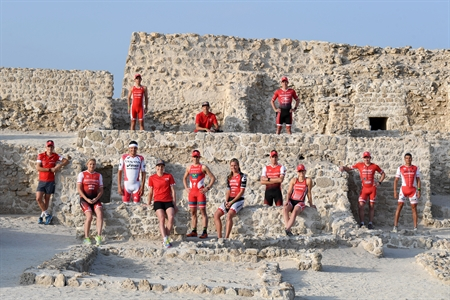 With eleven world championships and countless wins under its belt from the past three years, Bahrain Endurance 13 stands tall as the most successful team in the sport of triathlon. Its stable of athletes has raced on every continent in the world in the signature red and white colors they share with the kingdom of Bahrain, promoting a culture of health and wellness and endurance sporting excellence across the Gulf region and beyond.

The team was a pioneering vision of His Highness Shaikh Nasser Bin Hamad Al Khalifa, chairman of the Supreme Council for Youth and Sports and president of the Bahrain Olympic committee. His Highness, himself an endurance athlete, sought to promote triathlon and its healthy lifestyle and values through this all-star team racing for key world titles. Since then, triathlon involvement in Bahrain has grown to a record high that includes not just the usual demographic of executives and expats, but also local women and youths.