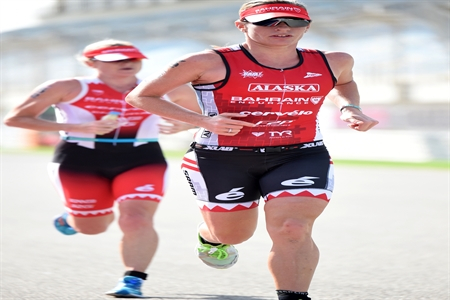 Six to toe the line in Bahrain

Members of the Bahrain Endurance 13 team have converged in Manama, Bahrain in the week leading up to the Ironman 70.3 Middle East Championship. Six of them will toe the starting line: Caroline Steffen, Jodie Cunnama (nee Swallow), Fredrik Croneborg, Terenzo Bozzone, Sam Appleton, and David Plese.

Steffen placed second to Daniela Ryf at last year’s edition of the race and will do everything she can to make that jump to the top spot of the podium. “It’s nice to be back in Bahrain for my third year in a row,” she says. “After having some time off, I’m back in full training and this will be my first race for the coming season. I’m excited to race on my new Cervelo P5X for the first time.”

Cunnama married her long-time partner James last week in South Africa, but arrived enthusiastic to race especially after her fourth place here previously. “It was important to us to race in Bahrain to honour His Highness Shaikh Nasser [Bin Hamad Al Khalifa]’s ongoing support of us, of endurance sport, and his quest to improve his nation’s health,” she says. “It has been a predictably hectic time for James and me. I have been doing a lot of wedding worrying, but also a lot of experimental racing in the past month: my first bike race on Saturday and some 5-kilometer and 21-kilometer road races. I have renewed passion for my career and usually for me that means happy racing.”

While Bahrain-based teammate Plese comes in as defending fourth place finisher here, Croneborg, Bozzone, and Appleton are making their first appearance on the start list.

Croneborg believes the race will be the perfect way to end his year, the highlight of which was his first Ironman victory in Malaysia last month. He says, “I look forward to meet my teammates with team leader Shaikh Nasser and attend the activities during this camp in Bahrain.” The team have already made the rounds at media centers, swum with the St. Christopher’s School squad, and conducted a night ride with Manama’s age groupers.

Bozzone is fresh off his first Ironman victory last week. “I am really excited to be able to race in the kingdom of Bahrain this year,” he says. “This will be the last race of my 2016 season and I will be sure to go out with a bang. His Highness Shaikh Nasser has done an amazing job growing the sport in the region and I am honoured to be on the team with some of the best athletes in the world.”

Appleton has had over a month since his last race at Ironman 70.3 Austin. He says, “I’ve managed to put together a decent block of training, so I am really excited to put that hard work into the race. It is going to be a special race for me as part of the Bahrain Endurance 13 team, so I want to make sure I am putting my best foot forward and representing the team with pride.”