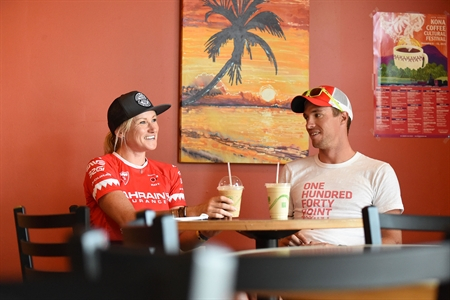 Triathlon’s fastest couple Jodie Swallow and James Cunnama are kicking off their 2016 triathlon season at Ironman 70.3 South Africa this Sunday, seeking to repeat their double victory in 2014.

The Brit-turned-local Swallow stands undefeated at this race, having won five out of five starts by leading from gunstart to finish. She seeks to extend the streak even further, especially since her 2015 season had been interrupted mid-year by chronic fatigue. She had only been able to ramp up her racing again late in the year with a silver at Challenge Phuket and a strong 4th place at Ironman 70.3 Bahrain.

“I’m looking forward to attempting to retain my title again on Sunday,” says Swallow. “I felt a lot of pressure last year going for 5 in a row, and I seem to feel that again! I guess that will remain as it is always special to add one more to a winning streak. I’m feeling good and happy to be back here.”

While Cunnama was forced to skip the 2015 edition due to injury, the South African has since racked up two wins and four podium finishes. This includes third place at Ironman 70.3 Bahrain in December, considered an early start to the 2016 racing season.

Cunnama says, “Racing on home soil is always special and having missed this race last year it is good to be back. I’m hopeful Jodie and I can again grab that special double win we had here in 2014.”

Both have had a good month of training at home in Stellenbosch, giving them the fitness, the confidence, and the momentum they need to win the home race.