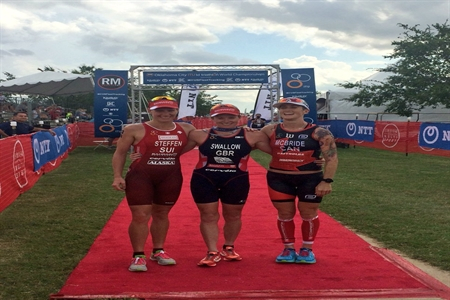 Jodie Swallow returned to the top spot at the ITU Long Distance World Championship this Saturday. The 2009 champion in a flawless wire-to-wire performance beat out two-time champion Caroline Steffen and Rachel McBride on the hot and windy course in Oklahoma City, USA.

The 4-kilometer swim proved in Swallow’s favor as the famously strong swimmer exited the water in front of the field and never relinquished that spot. She continued to fly on the 120-kilometer fast and flat cycle leg, extending her lead to four minutes by the time she hit the bike-to-run transition. By the time she broke the tape proudly wearing the Union Jack stripes on her uniform, the lead had grown to an insurmountable seven minutes.

“I am so happy to add another ITU Long Distance Championship to my name today in Oklahoma, seven years after my first. It feels really special. It is also my last race with Swallow on my bum,” she said, referring to her upcoming wedding to fiance and coach James Cunnama. “It isn’t always easy but on days like this it is worth it.”

Steffen came out of the swim in fourth place, but her bike split — the day’s second-fastest to Swallow’s — obliterated the difference to all but two women as she began the run leg. The Swiss Miss’s legs then took her forward into a well-earned silver medal finish. “I’m proud to represent my country at this year’s ITU Long Distance World Championships,” she said, describing the day’s race as wavy, windy, hot, and deathly hard.