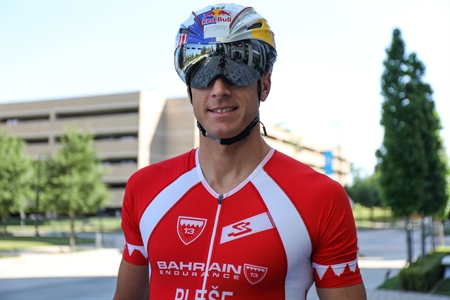 The racing heats up in Europe and Canada this weekend

Switzerland will see the trademark red over two race distances, as David Plese lines up for Ironman Switzerland and Daniela Ryf takes part in the 5150 Zurich.

After her winning long-distance exploits at the Ironman European Championship, Ryf is honing her speed over the shorter distance. She says, “I am really happy to race again in Switzerland in front of my home crowd.” She intends to back up from this with the Ironman 70.3 in Gdynia, Poland next week, racing herself into form to defend her Ironman 70.3 World Championship title in South Africa on September 1.

Plese is on track in his plans to qualify for the Ironman World Championship. He says, “I like to race, especially when I’m injury-free and getting better in the season. I want to close Kona Rankings in the first round if possible. After every race this year I got stronger, and I believe I will be in the best shape on Sunday.”

Javier Gomez is toeing the starting line at Challenge Prague. The half distance triathlon will be his first race back since his stunning Ironman debut in Cairns back in June, and the reigning Ironman 70.3 world champion has been in an intensive training block at home in Spain since then. He says, “A training race, but it’s always fun to toe the line.”

Over in Canada across the ocean, Brent McMahon is racing Ironman Canada in Whistler and Ashleigh Gentle is racing WTS Edmonton.

McMahon has sentimental reasons for choosing to race here, as it was his first experience watching an Ironman and stirred up the desire to race the distance. “It’s going to be great to race an Ironman in my home country and only an hour and a half from where I grew up learning to train and race,” he says. “This is the last big push of effort and training before I take a break in August, so the fitness from this event will carry over as I start my build for Kona.”

Gentle has raced in Edmonton many times in her ITU career, and racked up her first World Cup in 2011 at the venue. The weekend will see her race the individual WTS event, but she may also be selected for the Mixed Relay World Series race the following day.

She says, “Things haven’t exactly gone the way I would have liked so far this year, but this won’t stop me from being excited for each opportunity which is ahead of me. I still have a lot to look forward to. After Edmonton I return to Spain before racing Montreal WTS. From there I will return to Australia for the final few weeks before the Grand Final on the Gold Coast.”