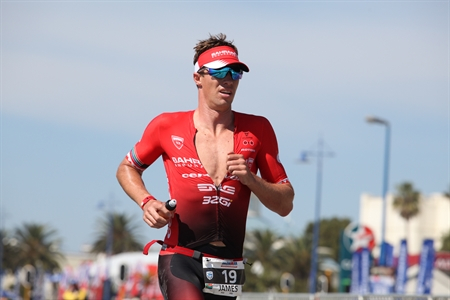 Bahrain Endurance secured twin podiums over the weekend as James Cunnama and Fredrik Croneborg toughed out races in South Africa and Korea.

At Ironman 70.3 Durban Cunnama faced heavy swells that delayed the start, forced two pros to DNF, and cancelled the age group swim. He moved into third place by the end of the bike leg and held on over the run to clinch the final spot on the podium.

Cunnama’s bronze comes on the heels of a silver medal finish at Ironman France two weeks ago which settled his qualification for Kona.

Meanwhile, Croneborg backed up with Ironman 70.3 Busan in Korea after racing in Japan last week. Just like in Durban and the other Ironman 70.3 race over the weekend held in Luxembourg, poor conditions on the swim course forced contingency measures. After a truncated 1,000-meter swim, the Swede emerged from the water in third place. While he slipped into fourth place and the chase pack early on the bike, Croneborg made up the gap to enter the run in third. He stayed strong to wrap up a podium spot having saved the best for the last of his back-to-back races.