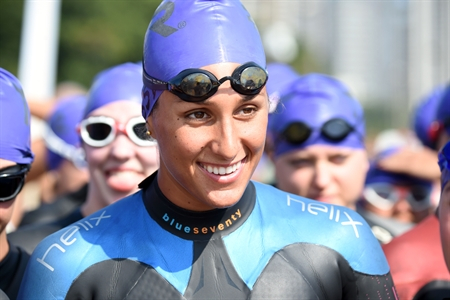 In Bahrain’s first foray into ITU elite competition, Sameera Al Bitar finished in the top ten in the ITU Grand Final elite women’s aquathlon in Chicago on Wednesday. She was also the only athlete from the Middle East to crack the top ten.

She followed that up the next day by finishing 13th overall at the age group sprint race, where she led out of the water.

A two-time Olympic swimmer for the Kingdom of Bahrain, Sameera ventured into triathlon with the Bahrain Triathlon Association’s (BTA) high performance developmental team. Funded in part by the Bahrain Endurance Team, the BTA athletes have been given new bicycles and opportunities to join training camps alongside other elite athletes.

Sameera was able to train with the Alameda ON Development Team in Egypt with Coach Michelle Dillon prior to competing in Chicago. She says of her first training camp experience, “It was the first time I ever trained three times a day, and as much as BTA coach Vicent [Beltran] spoke about the preparations it took to become a professional athlete, it was only when I attended this camp did I realize what it takes to reach the top.”

Coach Michelle says, “It’s very rewarding to see the progression we have made in just two weeks. It’s just the beginning and I know we can make much more progression, especially once the athletes get the right structure and consistency in their programs.”

With a swim at par with the top placers in the aquathlon, Sameera continues to work on her cycling and running. She says, “My goal for the next year is to really focus on my bike skills and run technique as well as competing regularly to learn and gain experience out of each race.” She will next compete in the age group sprint triathlon in Chicago, followed by a competition in Korea in two weeks’ time as well as a few local and regional races.

She dreams of one day earning points to qualify for the Olympic Games, this time as a triathlete representing her country. “Having seen what the Bahrain Endurance Team has achieved so far with all the great results really inspires me to keep pushing hard to try to reach that level one day,” she says. “The future plans of the team and having them come to Bahrain to do camps would be a huge benefit for us to learn from their experiences and journeys on how they’ve gotten to where they are today.”

Bahrain Endurance team manager Chris McCormack agrees. He says, “It is exposure to the world’s best, clear pathways and funding that will see Bahrain athletes winning world titles over the next few years.”