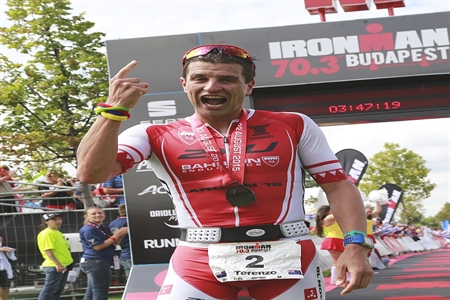 Terenzo Bozzone is back at what he does best, winning his 18th Ironman 70.3 at the inaugural Ironman 70.3 Budapest. After taking the lead early on the bike and extending it throughout the run, the Kiwi cruised to a 3:46:56 finish with a six-minute margin over the runner-up.

“Budapest — awesome city to visit and fun city to race around. Stoked to come away with the ‘W’,” Bozzone said.

After skipping some races and spending the last few months recovering from a running injury, Fredrik Croneborg continued his build-up toward Kona fitness with a steady performance at Ironman 70.3 Bintan. He made all of his gains on the rolling bike course, moving from eighth place to first off the bike. As Brad Kahlefeldt and Mike Phillips charged past on the run, the Swede held on to take the final spot on the podium.

Meanwhile, Javier Gomez snapped up his second World Triathlon Series win this season at Stockholm. With only two races left in the series, he is well on the way to winning an historic fifth ITU World Championship title.

“I was a little bit asleep at the start, so when I knew I was far behind I fought the second lap to move forward a little bit in the swim. I think I was the last person to make the first group on the bike,” Gomez said. A blistering run effort off the bike took him across the finish line with almost a one-minute lead. “I knew I had a good chance to win the race. I felt pretty good in the run because I could control the pace the whole time, so I am pretty happy.”

Now all eyes will turn to Austria this weekend as Gomez and fellow Bahrain Endurance teammate Daniela Ryf square up to defend their titles at the Ironman 70.3 World Championship.