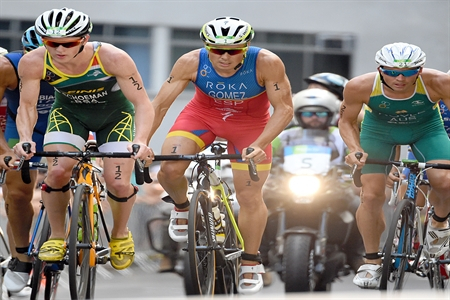 The minimum Javier Gomez needed to do was get on the podium at the 2015 Rio de Janeiro Olympic test event, but the Spaniard went above and beyond by taking top honors to earn himself and Spain a sure spot in the 2016 Olympics men’s triathlon start list.

He said, “I was saving some energy for the last two laps of the run because I am training for World Championships, so it was nice to win. I wouldn’t say it was easy, but it was controlled so I am really happy.”

A happy and relieved Caroline Steffen crossed the finish line in first place at the Ironman 70.3 Philippines in Cebu City, bringing her number of consecutive wins at the race to a record four. She topped a strong field that included Ironman champions and Kona qualifiers.

Steffen’s early lead was put to the test when a collision at 40 kph with a spectator crossing the bike course left her with abrasions and bruised ribs. Cameron Brown stopped his race to help Caroline, a wonderful testament to this New Zealand legend and reflection of our sport. Undeterred, she went on to win with five minutes over the next contender, and eight minutes faster than she went last year. She said, “As the defending champion, I felt I like I wanted to finish the race and if I still had the lead, I think I should win the race. So I gave it a go and never gave up.”

Fellow defending champion and Bahrain Endurance 13 teammate Brent McMahon placed third in the men’s race after Australians Tim Reed and Tim van Berkel duked it out in a sprint finish for first and second, respectively. McMahon powered to lead the race halfway through the bike leg and was first off the bike, but the two Tims had fresher legs and went on to put three minutes between him and them. He said, “I badly wanted to defend my title but these guys just made it tough!” McMahon managed to fend off a charge from two other speedy Aussies: Mitch Robins and 5-time world champion Craig Alexander.

Steffen and McMahon now will focus on their build-up for the Ironman World Championship.

Bahrain Endurance 13 team manager and honorary member of the Bahrain Endurance Racing Team Chris McCormack snuck in a race at the Wales Sprint Triathlon this weekend while on a family holiday. As his wife and three children looked on, he claimed third place on a cool, overcast day, the perfect conditions to lead into Iceland’s first half distance, the Jarnmadurinn Triathlon, this coming weekend. This will be McCormack’s first individual half distance this year after successfully forming the Bahrain Endurance Team.