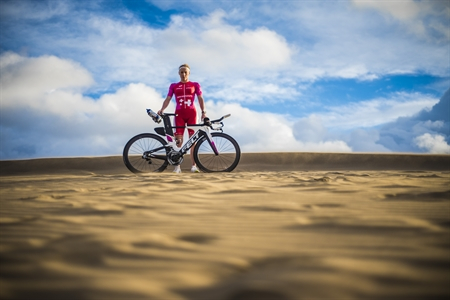 All eyes are on Frankfurt, Germany this weekend as two titans of the triathlon world race the Ironman European Championship. World champions Jan Frodeno and Daniela Ryf will aim to validate their spots on the Kona starting line and test their form in the biggest and toughest field outside of the Ironman World Championship.

Frodeno made his Ironman debut in Frankfurt back in 2014, wowing the crowd and qualifying for the world championship with a third-place finish despite three flats on the bike. He then placed third in Kona, cementing him as an athlete to watch. He made good on that potential the following year when he handily won both races.

The German’s road to his home race this year was not without challenge. A crash during a training ride left Frodeno with 10 stitches on his face and some bruises, but he was able to continue training until a few days later when a ruptured hamstring tendon put him off running for a week.

Frodeno says, “It’s been quite a ride in the last weeks, not knowing what’s going to happen. Truth is I’ve torn a hammy tendon and the resulting fluid has been pushing my nerve. Not

pleasant and left me wondering if I could race. Riding’s been good though, and I really wanted to push to be at this race as it’s quite the hype.” He adds, “Seriously happy to put on the race suit and leave it all on the course for Sunday!”

Ryf raced her fourth career Ironman in Frankfurt in 2015, winning it en route to claiming her first Kona title. This year her training focus has been squarely set on defending the World Championship for the third consecutive time. A big break at the start of the year followed by focused training camps in St. Moritz have brought her fitness to its peak in the European summer. If her dominating performance at Ironman 70.3 Switzerland last month is any indicator, she could walk away with her second European Championship title.