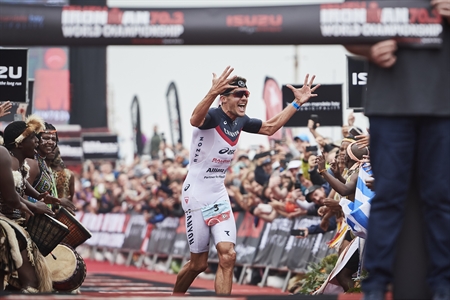 Jan Frodeno reclaimed the Ironman 70.3 World Championship title today in a nailbiter race that pitted world champions and world beaters against each other. Just as in 2015 when the German last won, Bahrain Endurance athletes also occupied all steps of the podium as Alistair Brownlee from Great Britain and Javier Gomez from Spain took second and third, respectively. Ben Kanute took fourth place after a tough run battle against Pieter Heemeryck and Sam Appleton.

Frodeno emerged shoulder-to-shoulder with Kanute from the 1.9-kilometer ocean swim in 21:52, with Gomez and Brownlee following just seconds after. This made for a very speedy 90 kilometers and a scorching 2:04:30 bike split for Brownlee among the lead group of six athletes. But with a spread of only ten seconds between first and sixth off the bike, it was a race to be decided on the run.

As if Frodeno wanted to prove he could beat Brownlee and Gomez in a foot race, he drew first blood with the faster transition and was first out onto the half marathon run course just ahead of Brownlee. Meanwhile, Gomez had stayed in touch inside the lead group. Once he found his rhythm, he moved into third place with the fastest five-kilometer split, an average of 3:03 minutes per kilometer.

Gomez attempted to surge past Frodeno, but the latter refused to let him go. By the 10th kilometer, Frodeno and Gomez were running side-by-side, while Brownlee had dropped off the pace into third. The fierce competition between the athletes produced 10-kilometer splits of 31:24 for Gomez and 31:38 for Frodeno.

But Gomez started suffering from cramps, allowing Frodeno to break free of their Iron War-reminiscent run battle. Meanwhile, Brownlee recovered his composure and capitalized on Gomez’s momentary weakness to run into second. But both ran out of road to move further up the leaderboard as Frodeno stopped the clock in 3:36:30 with a sensational 1:06:33 run.

Frodeno grew up in South Africa and considers the win here very special. He said, “For the first time in six years I’ve been back. To come here is special for one, but to come back and perform in front of a ‘second home’ crowd is just epic.”

“I was a little bit angry because Alistair and I did all the work all day on the bike and tried to break away, tried to do anything and nobody came. Ben Kanute came around once, but then I really wanted to hold the flag high in a foot race, which I knew was tough, but somehow today I just had my running legs,” said Frodeno. “One minute Javier was breathing down my neck, the next minute he was gone but I didn’t realize he was gone. I was running for my life breathing so hard I didn’t hear anything myself.”

Brownlee mused, “Obviously I want to win, but I gave it everything today and I’m happy with that. To be honest, I’ve had a tough year this year with injuries and a few things and just not been myself, so basically the last three or four weeks is the only training I’ve done really.”

Gomez was sanguine about taking third place to Frodeno again. He said, “I tried to run with Jan, I just had to stay behind him, try to recover a little bit and plan my tactics, but I just started to feel bad. Unfortunately I had to walk for a bit and then just jog ‘til the finish line. But regardless of that, Jan was the best one today so congratulations to him. He did an impressive race. And well done to Alistair as well.”

Frodeno and Gomez will now commence their final training blocks for the Ironman World Championship. Gomez said, “I’m excited for my first Kona.”