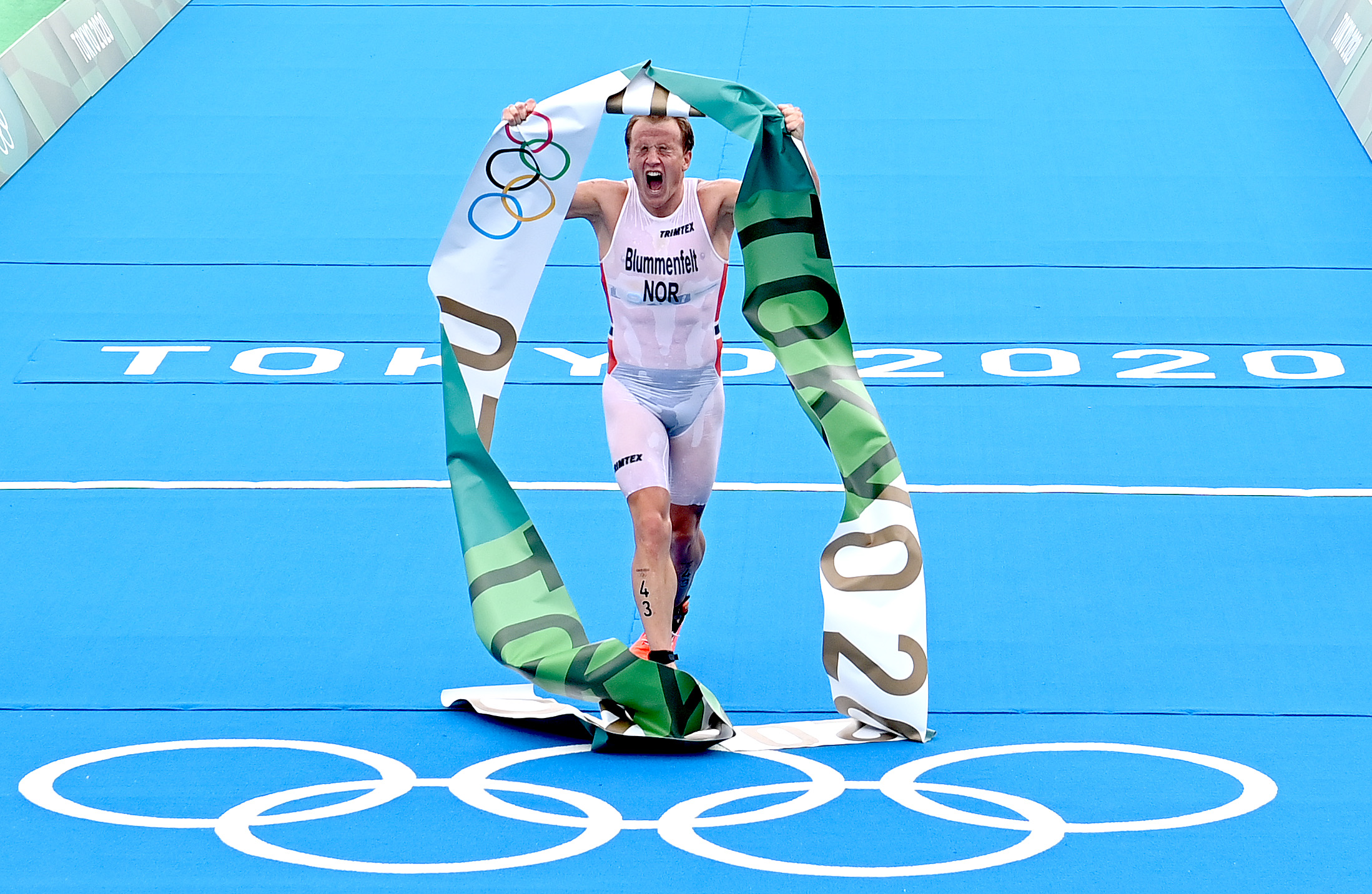 Blummenfelt recaps Tokyo and the road to Kona

He’s scarcely had time for a breather since that astounding win in Tokyo crowned him the Olympic champion, but now Kristian Blummenfelt has another opportunity to make history. The wildcard entry Ironman has given him has opened up a pathway where he can vie to win the World Triathlon Championship Series in Edmonton as well as be a legitimate contender at the Ironman World Championship in Kona, Hawaii.

We sat down with Blummenfelt and his coach Arild Tveiten to talk about his perfect day just past, and what the game plan is to go from Tokyo to Kona.

“When he came to the race, I think it was more or less perfectly executed what Kristian said he would do,” says Tveiten, who was trackside at Odaiba Bay. “I saw he was in control and I didn’t do too much coaching at the venue, but I said on the last lap just trust yourself; you know what to do. It was a tough race and he pushed hard in the end… If you want to win the race, it should cost a little bit.”

Blummenfelt emerged from the swim 20 seconds back from the leaders. Along with his Norwegian teammates Gustav Iden and Casper Stornes they supercharged the chase pack to bridge the gap on the bike and bring the chase for gold onto the run.

“The fact that Alistair Brownlee wasn’t there within the first pack on the swim, that made me believe the first pack wouldn’t have a chance to stay away because there were no really strong cyclists willing to drive away,” Blummenfelt reveals. “I think everybody believed it would be a 10K run race. With a few domestique riders like Matt Sharpe pulling Tyler Mislawchuk and nobody else interested in doing anything in the last 20 kilometers, I was just trying to squeeze onto Sharpe’s wheel to use him as my domestique instead, and just be as rested as possible for the run.”

He stayed within striking distance of the lead, then broke away with Alex Yee and Hayden Wilde to decide the podium amongst themselves. “When you are three guys getting a gap in the Olympics, you’re all thinking, ‘Okay, yes, now we have a medal.’”

But instead of just settling for a medal of any color, Blummenfelt made his move. With a gut-busting surge in the final few kilometers, he locked down the gold he has desired since he was scouted for Norway’s first Olympic triathlon squad just over a decade ago.

“We have really been putting the pressure on ourselves coming into this race. So it was a relief that we actually did it… I knew that if I didn’t, it would be like a quite dark month coming up and that it was something that would stick in my mind for the next three years,” Blummenfelt admits.

Post-Olympics, the original strategy was a quick turnaround in training to get on the podium at the Ironman European Championship in Frankfurt and secure a Kona start. They would then hop across the Atlantic the following week to race the WTCS Grand Final in Edmonton before settling down for a final training block leading into the Ironman World Championship in October.

Tveiten says the Ironman wildcard will be beneficial for his charge. “On one hand you could say it could have been really good for him to test out the distance before, but on the other hand he’s in really good position for the overall series win at the Grand Final. It’s very good that he can go and perform at the level that he needs to be and then switch to the Ironman.”

Blummenfelt agrees, though he is wistful about not racing Frankfurt. “I got to do nine hours combined of race pace on Monday and Tuesday before I got the wildcard, so I was actually thinking almost like I hope I’m not getting the wildcard because I’m really prepared for Frankfurt now,” he says. “But also it makes it much more likely that I can have a good race against Alex Yee in the Grand Final. It’s going to be a proper battle for the overall in Edmonton.”

Blummenfelt is ranked #2 in the world with a total of 2677 points collected over the WTCS races and Olympics, just 39 points behind Yee. With 1250 points going to the winner of the Grand Final and his wins in Yokohama and Tokyo, Blummenfelt could top the series and clinch the title of World Champion.

And then, onward march to Kona. Tveiten reveals, “From the lab and what we are seeing in training, we are not afraid of the distance. We are not afraid of the preparation he needs to do. We know of course it will be a different game, but believe it or not he has a body and a mind to really execute well in an Ironman race.”

The Norwegians are famous for the volumes at which they train, which approximate the load of most professional Ironman athletes. Blummenfelt reveals, “We will trade off a little of VO2max because I have a high enough one for Kona. From what we’ve done so far, it’s not the VO2max that’s the limiting factor. So I guess it would be sea-level training and then heat preparation. We’re going to be just trying to get the power and muscular stamina up because it’s one thing to run a three-minute pace for 10K. It’s another thing to do 3:45 for two and a half hours off four hours on the bike in a tight TT position.”

Blummenfelt has already played out scenarios for winning in his mind. “I think I can run away from everyone on the Island. The biggest failure I can have, or the biggest mistake I can do is to go too fast and try to put pressure on other athletes too early. To me, it’s more about surviving until the last 10K. So that means swimming with the first pack, just staying there and not really worrying about the guys from behind catching us or not. And then I’ll just do nutrition right. Coming to the run is just about going at my pace for as long as possible. And then with 10K to go, it’s more than enough time to smash it.”

Goal by goal, Blummenfelt has accomplished what he has set out to do and put Norway on the triathlon map, despite those who declare his feats impossible. Tveiten attributes it to his mindset. He says, “If you want to improve as an athlete, but also as a coach, you also need to — don’t set limits for yourself. There’s no limit. You can always see that you can improve further. That is some of the driving force for the national team. That’s part of the environment, but it is very much Kristian as the athlete who’s going first and setting direction.”