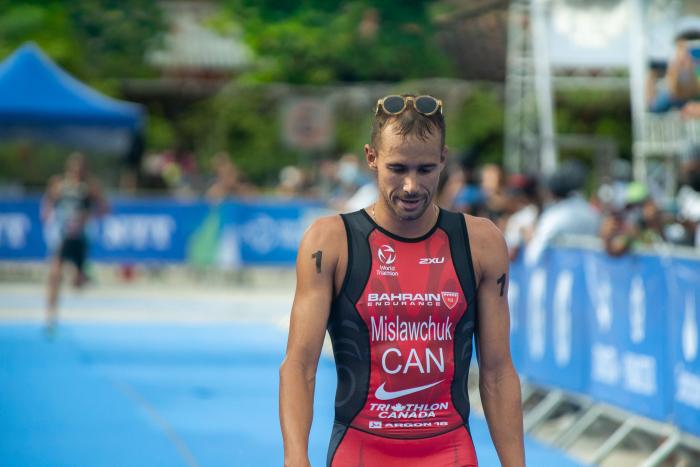 Tyler Mislawchuk: A dream Tokyo prep turned into a nightmare

In the weeks leading into the Tokyo Olympics, Tyler Mislawchuk received high praise from two-time Olympic gold medalist Alistair Brownlee, who picked him to win. Picking up an injury was not ideal, but as Tyler puts it: that’s sport.

We caught up with the Canadian champion on his road to recovery and return to racing.

How was the lead up going into the Olympics?

It was a wild journey being pushed back a year, a bit different. My coach and I decided this gives us 18 months of uninterrupted, no-racing training. When else in my career have I had that? So we took advantage of it: got in better shape swim, bike, and run than I’ve ever been.

We took an unconventional lead-up; we we raced only hot races which were in Mexico, Portugal and in Los Angeles so over those three races I won two and got a flat in the other

And then about two weeks before the Olympics my Achilles flared up. It got quite bad where to the point that the day before, I was hurting to do a stride. I figured, go out there, do my best, give it a good shot.

So we pretty much nailed everything until about 10 days out, which is sport, right? It’s not scripted; you can’t write it, and that’s why people love watching it. Sometimes you’re on the receiving end of it, unfortunately.

The Olympics itself was probably not what I expected. I thought it was going to be one big pack straight away — and I ended up being in a lead group of nine athletes so I had to reassess the game plan. Jonny Brownlee and I rode across and decided the pack is probably going to come together, so try to save your legs for the run and hope the Achilles is all right.

Getting off the bike in decent position I ran with the leaders ‘til three or four kilometers in, but with every step my Achilles was throbbing. I ended up finishing 15th, which for me was extremely disappointing.

A lot of people when I came home said, “Oh, 15th at the Olympics! Fifteenth best in the world, that’s awesome!” Maybe in a few years I can appreciate it, but right now I had one goal and that was to win, and I came up short. But everyone in the race dreamed about that for four or five years, and it just wasn’t my day.

What is it like when the one event you’re focused on doesn’t go the way you want?

If you watch the finish line, everyone’s collapsing, falling over, on the edge. And you can see me just walk straight off because obviously I wasn’t at my limit breathing-wise. Physically I was held back by my Achilles.

I had just complete anger at first, which eventually turned into sadness. I think it’s part of sport and if you don’t open up about that I think you’re just lying.

Someone wise once told me the more you care, the more you’re going to be upset — or the more joy is going to come from achieving or failing at a goal. I honestly just cared so much that it’s taken me a long time to get over it. And I’m still probably not over it.

It does add fuel to fire. A lot of times in my career, the lowest points are often followed with highs because of stoking the fire a bit and adding a bit of extra motivation to come back, which is kind of the point I’m at now.

What have you learned about yourself over the last few years heading into as well as after the Olympics?

That I can compete with the best guys in the world. A lot of times especially as a young kid I dreamed of just going to the Olympics; that was my dream just to be there, to participate in Rio was a dream come true.

Fast forward a few years later and I’m now competing with some of the best guys in the world. For me just gaining that confidence day after day, month after month, year after year… A lot of times I get to a new level and go, “Do I actually belong here? Did I get lucky?” The last few years I’ve realized that no it’s not luck; it’s a lot of hard work, a lot of dedication, and a lot of ups and downs are part of that. It’s a roller coaster and trying to avoid those emotions or those highs and lows is almost impossible in this sport.

Tyler four years ago versus Tyler today, the biggest difference is the hairline. But in all seriousness, probably the biggest thing is self-belief. Just continually racing well over the last four years has given me that self-belief that I actually deserve to be here.

What was it like sharing the same Olympic course with your Bahrain Endurance 13 teammates?

Being part of this team is pretty special. Some of these athletes are a similar age to me, but most of them are older so I watched them before I even got on the circuit. Someone like Javier Gomez, we actually had a laugh on the start line because he was saying this was his last ITU race and I was making the same joke. He said, mate you’ve got about 15 years left in you.

It’s little moments like that I’ll remember for life. I watched these guys growing up and to be on the same team as them is pretty surreal and to share the same race course and be racing amongst who I consider legends… Anyone who’s at that level I have the deepest respect for, because I know what it takes to get to that level.

What did it mean to you having Alistair Brownlee pick you as one of his favorites for the race?

I didn’t see that coming, but I think he saw that I approached the race as an all-in type of format. I did all my training, all my racing towards that one race.

I watched Jonny and Alistair growing up and I have a treadmill in my basement that only goes 10 miles an hour (so about 3:45 per kilometer). I used to set it at that and set it to about 15 degrees incline and just run on as hard as I could for as long as I could. Sometimes it’d be 30 seconds ,sometimes it’d be 40. I had a poster of them in front of it and I remember just staring at the poster dreaming of sprinting against these guys one day. It’s pretty special for me to have Alistair pick me as a favourite.

How do you keep positive moving forward after a period with some really deep lows?

One of my favorite quotes is: if you’re not going to do it, someone else will. That’s the phrase I’ve been using to pick myself back up — get into rehab, get on the bike, get in the pool even if you don’t really feel like it. Because if I don’t do it, someone else is going to step up and take my place.

Some days aren’t going to be great; some days waking up and training is going to be tough when you’ve gone through some of the lowest levels of your career. I’d be lying if I said it’s been easy, but there’s something I love more than anything else in the world, and it’s racing. It’s following this passion and dream that I have of triathlon, of competing at the highest stage against the best guys in the world.

There was an Achilles tear, and tendinopathy, and fluid in my Achilles — so three things going on, all not great.

Healing the tendon isn’t really straightforward like healing a bone; it’s not like six to eight weeks. It’s been quite the process; my tear is healed, so I’m dealing with tendinopathy now. I’m in athletic therapy and physio getting dry needling multiple times a week. I do about 200 eccentrics on my Achilles every day, calf raises.. Pretty much everything under the moon and it’s just like a full-time job basically taking care of this old man Achilles at the moment.

What are your future plans for racing?

My goal is about racing Abu Dhabi; whether that’s likely or not we’ll find out in the next few weeks. It’s a lot of training, a lot of therapy between now and then. If I can race, great! If I can’t, then I’ll keep progressing to the beginning of next season. Either way O’ve already gained extreme motivation from the forward progress; although it’s been slow, it’s sped forward so that’s all I can ask for at this point.

The next three years are all in for the Paris Olympics. Between then and now, there’s a world championships in Canada. There’s sprint world champs in Montreal next year, so obviously home race for me; that’s got to be a big one. Getting to do a bit of Super League Triathlon for sure; I missed out on that this year and it looks like a blast with the added team component.

Getting back to healthy for me is number one; I haven’t really raced at the top-level this year, so just getting back to the top level and racing healthy…

I don’t think people really know what kind of athlete I am because I haven’t really raced in two years, so there’s a lot of people probably counting me out. But that fires me up and helps me get up in the morning, so the more people that write me off, it keeps me going.