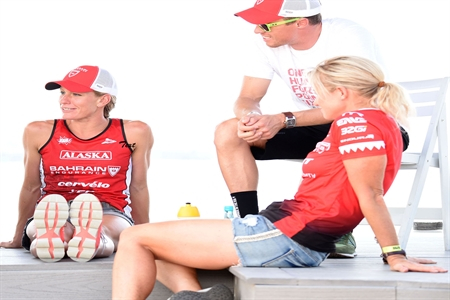 Bahrain Endurance among the medals again

Jodie Swallow ran away with the win at the Ironman 70.3 Jönköping in Sweden, proving she not only can swim and ride hard, but also has the run legs to secure the title.

The Briton set up her lead with her trademark blazing swim which saw her exit the water in 8th overall, overtaking many of the pro men despite starting one minute back. However, Kimberley Morrison managed to pull her back on the bike leg with the two women back into transition seconds apart. On the run Swallow truly took flight, extending her winning lead to more than five minutes as Asa Lundstrom overtook Morrison for second place.

“Happy to come away from the inaugural Ironman 70.3 Jönköping with the win!” she said. “It is quite difficult going into a race with the favourite tag, but I am glad that I was able to carry that weight despite being a little underprepared and under-the-weather this week. Two out of two wins on Swedish soil – I think there should be more races here!”

James Cunnama finished in third place, having taken the lead and controlled the pace of the men’s race at several points. He said, “A cold picked up last week almost saw me pull out before the race even started, but I’m glad I did and it actually didn’t affect my day much at all. I’m very happy with a podium and even more so with how I felt out there. It sets me up well for the coming weeks of hard work.” The South African, who also coaches Swallow, had planned to use the race as a jump-off point for their respective builds leading into the Ironman World Championship.