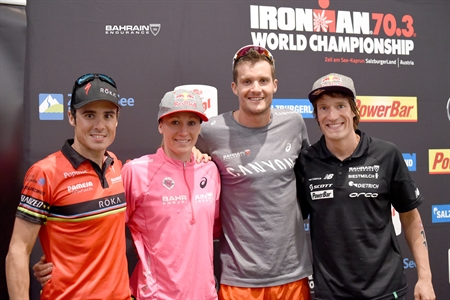 The Swiss powerhouse exited with the lead pack on the swim and smashed out the women’s fastest bike split to head onto the run course in first place. Running sub-4 minute kilometers, Ryf broke the tape in 4 hours, 11 minutes, 34 seconds — 10 minutes ahead of the rest of the field.

She said, “It was my goal today to show my best, and I did it. I felt very comfortable on the bike, though the race overall was very hard. I went into the run with an advantage but I hit my limit. To defend this title means a lot to me.”

In winning this race Ryf has also ticked off the second race in the Nasser Bin Hamad Triple Crown series, coming a step closer to claiming the million-dollar prize should she win the final race at Challenge Bahrain in November.

The Olympic gold medalist exited the swim in the lead bunch alongside Gomez and took his chances on the descents on the bike leg to get ahead of the field and into second place for the run. Within the first kilometer he had overtaken the leader and held his position until the end to win in 3 hours, 51 minutes, 19 seconds.

Frodeno said, “It was sensational, but I’m totally done. It was one of my toughest races. The atmosphere was sensational on the course. It seemed to be that I heard my name 1000 times per lap, which pushed me a lot. I had to fight all day, there was no moment when it just flowed.”

Kienle’s training on the course six weeks ago proved invaluable as he held back on the bike and then ran himself into second place with a steady half-marathon. He said, “I know that you could blow yourself up pretty bad on the bike and I think that happened for some of the guys because I never expected to sit in the middle of Javier Gomez and Jan Frodeno and being faster than those guys on the run! Jan showed some mercy and didn’t go all out on the run. I’m super happy with second place.”

Gomez completed the Bahrain Endurance podium sweep by running himself into third place despite being ill earlier this week. He said, “Today wasn’t my day, felt flat from the beginning and struggled to finish the race. Did the best I could to come third… Today Mr. Jan Frodeno was amazing and the well-deserved World Champion, great race! Also well done Sebastian Kienle for second.”

Cramps took Terenzo Bozzone out of the running for the Triple Crown. He said, “Super gutted to not be able to finish. Penalty early on, started cramping after the break.”

After a crash yesterday when her tyre blew out on a 15-percent descent, Jodie Swallow still opted to start, but pulled the pin on her race during the bike leg. She said, “Body just locked up today from yesterday’s crash.”

Joe Gambles and Sam Appleton rounded out the Bahrain Endurance contingent, finishing as the second- and third-fastest Australians in the pro field.