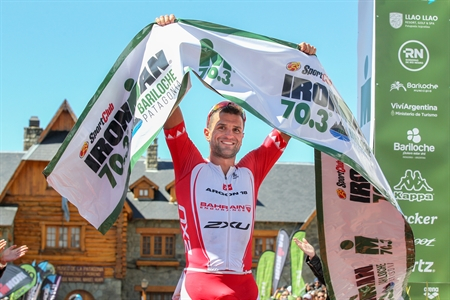 A mere seven days after his stellar Ironman New Zealand triumph, Terenzo Bozzone backed up by winning the inaugural Ironman 70.3 Bariloche in Argentina.

The Kiwi came out of the 1.9-kilometer swim in the front group and set the pace early in the 90-kilometer bike leg. While he battled on two wheels with Kennett Petersen and Igor Amorelli, ultimately Bozzone led off the bike onto the half-marathon. On the run, he put on a scorching pace for which his rivals had no answer. His winning time of 3:59:57 was four minutes faster than his closest competitor and the only sub-four hour finish that day.

“Had a great day out there today,” said Bozzone. “Thanks to everyone cheering out there on the course!”

The five-time world champion will attempt to extend his winning streak this weekend as he races Ironman 70.3 Campeche in Mexico.