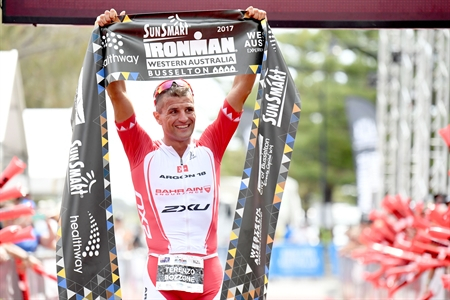 Terenzo Bozzone has rounded out four straight weekends of racing with a successful title defense at Ironman Western Australia. After securing the Ironman 70.3 Los Cabos title and taking very close seconds at Island House Triathlon and Ironman 70.3 Middle East Championship Bahrain, it seems the talented Kiwi has gotten faster the more he has raced.

While the swim at Busselton was canceled due to a shark sighting, Bozzone still had to contend with the Australian summer’s heat as well as tough competition from the pro athlete lineup. Down four minutes going into the marathon after struggling on the latter half of the bike leg, he made up the time and then some to break the tape first.

“It was amazing to come away with the win and these guys kept me honest all day,” he said. “Dougal [Allen] rode the second half of the bike really well and he always puts together a solid run. Not a bad day for the Kiwis: first, second and my good friend Cam Brown in fourth.”

With eleven world championships and countless wins under its belt from the past three years, Bahrain Endurance 13 stands tall as the most successful team in the sport of triathlon. Its stable of athletes has raced on every continent in the world in the signature red and white colors they share with the kingdom of Bahrain, promoting a culture of health and wellness and endurance sporting excellence across the Gulf region and beyond.

The team was a pioneering vision of His Highness Shaikh Nasser Bin Hamad Al Khalifa, chairman of the Supreme Council for Youth and Sports and president of the Bahrain Olympic committee. His Highness, himself an endurance athlete, sought to promote triathlon and its healthy lifestyle and values through this all-star team racing for key world titles. Since then, triathlon involvement in Bahrain has grown to a record high that includes not just the usual demographic of executives and expats, but also local women and youths.