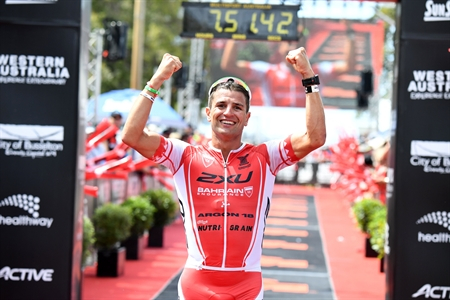 Terenzo Bozzone has finally struck gold taking his first Ironman title and smashing the men’s course record in Busselton, Western Australia. He took the victory in style with a sub-8 hour finish in 7:51:25, more than four minutes clear of the previous record set last year at this race. It is also the 12th-fastest Ironman-distance finish time in history.

“I can’t believe it. I started my IRONMAN career in 2009 and I’ve finally got to the top of the podium. This is unreal. It’s been an awesome adventure,” said Bozzone.

Since he made his debut on the iron distance seven years ago, the New Zealand native has come tantalizingly close to the top spot of an Ironman podium with four silvers in the past years. In the lead-up to the Ironman World Championship training with defending champ Jan Frodeno, the former Ironman 70.3 world champion had held his own. However, with a disappointing DNF in Kona due to his legs swelling, Bozzone set his sights on Ironman Western Australia to redeem himself.

Training partner Nick Kastelein came first out of the water and the two men set the tempo early on the bike leg. It was Bozzone who made the first move to get away. By the time he hit the bike-to-run transition he had a nine-minute lead over the rest of the field. While Andy Potts chipped away on the run to take second over Kastelein, Bozzone’s win was never in doubt.

He enthused, “I just felt good today; it’s an amazing feeling to get my first Ironman win.”