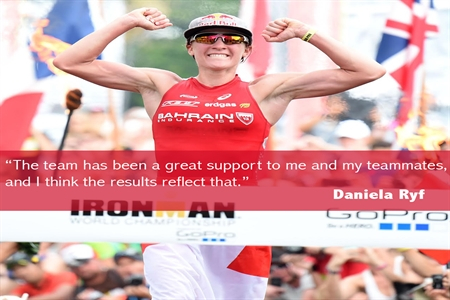 The Swiss came to the team as an Olympian and the 2014 Ironman 70.3 World Champion. An amazing talent, she had switched coaches in 2014 and started to see some success over long-course racing, finishing second in her first appearance in Kona. Bahrain Endurance 13 identified immediately with her talent and potential, and Daniela became the first female signed to the team in 2015 with the absolute support of management and HH Shaikh Nasser to pursue her goal of dominating Ironman racing.

2015 was a flawless year where Daniela absolutely dominated every event she raced. She closed out the Ironman 70.3 World Championships in Austria with a performance head-and-shoulders above the competition, becoming the team’s first ever female World Champion in what was one of Bahrain Endurance 13 most magical racing days. She went on to win her first Ironman World Championship and solidify her place as one of the team’s most valuable signings.

In 2016, HH Shaikh Nasser Bin Hamad Al Khalifa launched the million-dollar Triple Crown series bonus as an extension of his desire to change the sport of triathlon. Daniela went on to win the biggest prize cheque ever handed out in the sport in front of all the fans in Bahrain and the King Himself, delivering the conclusion to what the team strongly considers the greatest racing year ever witnessed.

Daniela Ryf has become an icon of the sport. She continues to push the standards and expectations of the team in its pursuit of excellence. She has won three Ironman World Championships, two Ironman 70.3 World Championships and lost only three times in the last three years on this team. An absolute professional in every way, she has been the most dominant force in raising the bar for the team’s expectations, a key influence on the team culture. With her capacity to focus, execute, and win like no athlete of the last three years, she is the gold standard.