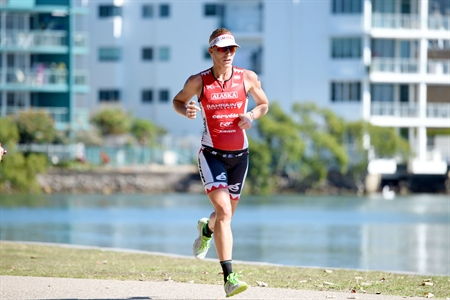 Five for Steffen in Cebu

Caroline Steffen took her fifth consecutive title at the Ironman 70.3 Philippines this weekend, prolonging her reign as “Queen of Cebu” as well as winning the Asia Pacific Regional Championship.

The Swiss speedster in Bahrain racing red battled with Czech nemesis Radka Vodickova in a race that ended like their first match-up on Philippine soil last March at the Ironman 70.3 Subic Bay.

Vodickova emerged first from the 1.9-kilometer swim and led until halfway through 90-kilometer bike leg, but Steffen powered forward from the final turnaround to enter transition and start the 21-kilometer run leg in front.

Steffen finally shook off her pursuer on the last few kilometers, feeding off the massive crowd support that had seen her through many previous races in Cebu. She enjoyed a two-minute lead into the finish chute.

“It’s absolutely crazy out there, especially those cheerleaders being out in the sun pretty much all day, they’re doing big work, those schoolkids — it’s just, it’s amazing,” she said. “It’s very unique when you race five times in a row and win in the Philippines.”

In the men’s race, Brent McMahon emerged from the water in third and battled among the lead group of seven on the bike leg to be first off the bike. After struggling on the run, the Canadian finished in 8th.

He said, “Unfortunately the race went downhill after a strong bike but I’ve always finished here in Cebu and I was darned that was going to change this year. Back home for some work on the body and then off to 70.3 World Champs en route to Kona.”

Meanwhile, Fredrik Croneborg is in Sweden building up to Embrunman next week. As a tune-up, he took second place at the Mora Triathlon.