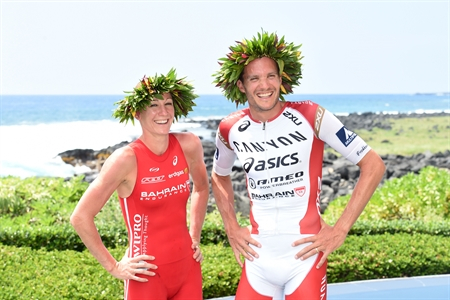 Defending the Ironman World Championship is notoriously difficult; in its storied history only 4 men and 4 women had accomplished the feat. Today Daniela Ryf and Jan Frodeno claimed their place among those titans of the sport as the two took victory once again in Kailua-Kona, Hawaii.

While they were heavy favorites leading into the race, both were perceived as vulnerable since they had already done two iron-distance races this year and had not defended their Ironman 70.3 World Championship titles. Yet both were able to prove they are the world’s best on this single-day test of strength, endurance, and willpower.

Ryf obliterated her competitors with Swiss precision. Her strategy of swimming in the lead pack and pushing the pace off the front on the bike paid off as she got onto the run with an eight-minute head start. By race’s end, Ryf was 20 minutes clear of the eventual runner-up Mirinda Carfrae and third-placer Heather Jackson.

“It was a perfect day. It was the best Ironman I’ve ever done,” said the Swiss. “To be honest I was doubting, not so sure where my bike form was after Mooloolaba and this race shows don’t doubt, just do.”

Not only was she on form on the bike, but she also set a new personal best in her first sub-3 hour marathon on the island. Ryf said, “I knew I could run okay and so far I just never had to really show it, or maybe sometimes I couldn’t show it… Today I felt really solid in the marathon and with about 4K to go my team said, ‘If you want, you can go’ and my coach was watching and he said, ‘go for it’ and that’s where I was like ‘OK I’m gonna try it.’

“The last 4K were amazing. The crowd was so incredible. They just push me so hard. It was not just a great win. It was a great experience and that’s what it’s all about in our sport — to make great experiences and it’s a day I will never forget.”

His fellow German Sebastian Kienle didn’t make it easy for him: the two men were off the bike within seconds of each other and ran the first half of the marathon together. Frodeno pulled away on the infamous climb on Palani Road, leaving Kienle in second to fend off the hard-charging Patrick Lange.

Frodeno said, “I have to say Sebastian was pushing all the time and up Palani I was just trying to go at my own pace. He was stronger on the hills before so I was surprised he dropped back. I obviously tried not to get too excited which is a bit hard when you’re leading a world championship.”

It still wasn’t easy pickings racing off the front; Frodeno dug in deep, grimacing through the final mile through town. He only started to celebrate with high fives from the crowd as he ran through Ali’i Drive to meet Ironman legends Mark Allen and Dave Scott the finish line. “I can’t remember when I last suffered so much. Right now I’m just so happy to be here,” he said. “Thank you to all the locals for giving us your space, sharing your roads. Mahalo, much appreciated.”

Fellow Bahrain Endurance teammate Ben Hoffman finished just outside the Top 3 after being in the mix all day. It took a record-breaking 2:39:45 marathon from Lange to bump him off the podium. However, as first American after a trio of Germans, Hoffman can once again lay claim to being the best in the USA since his 2014 runner-up finish.

While Terenzo Bozzone called it an early day partway through the marathon, the rest of the Bahrain Endurance contingent finished safely. Jodie Swallow crossed the line 22nd among the pro women. James Cunnama finished in 26th and Brent McMahon in 30th (just in front of Ryf). David Plese ended up inside the Top 20 for the first time, improving on his past Kona performances.