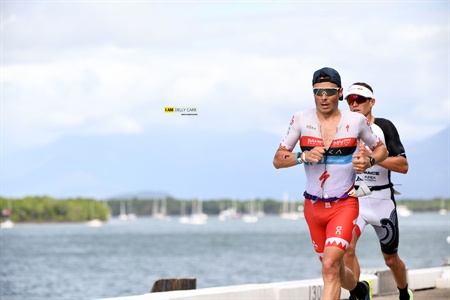 It was a stellar podium performance for Bahrain Endurance athletes at the Ironman Asia Pacific Championship, as Javier Gomez left an impressive mark with his Ironman debut clinching silver with a 7:56:39 finish just under two minutes down from winner Braden Currie. Terenzo Bozzone snagged bronze with a late surge in the marathon.

The five-time ITU world champion conducted a controlled race from the start, emerging with the lead men from the choppy 3.8-kilometer swim and riding within himself over the 180-kilometer cycle course as Currie dictated the pace of the lead pack. Bozzone led the chasers then put in a surge in the final half of the bike ride to get onto the marathon first.

Currie was first to bridge the gap to Bozzone, but Gomez continued to pick up the pace and move through the field, catching the two at the 14th kilometer. Soon, it was a battle between Gomez and Currie for the top spot. With 10 kilometers to go, Currie put in the breakaway to lock in the win.

“I had a pretty good race. It was just 10K too long,” quipped Gomez. “I just tried to focus on making it to the finish line. Braden was amazing.” He added, “I’m still very pleased with my time and to become officially an Ironman.”

With this finish, Gomez has ratified his spot on the Kona pier come October.

While Bozzone had dropped off the pace once overtaken by the lead duo, he found a second wind in the final kilometers, which was enough to propel him to third place ahead of Tim O’Donnell.

“The gap just got bigger and bigger but we hit that third lap with 15K to go, it was like, ‘It’s either call it quits or make it count,’ and I got to find another gear,” Bozzone said, “It’s good practice for Kona, I guess, where those last 10 K’s you can hit a wall there.”

After a slow start to the day after the swim David Plese clawed back time on the bike finishing in tenth and then another spot on the marathon to finish 9th.

More racing from Bahrain Endurance will take place in Europe this weekend, with Daniela Ryf getting back in action at Ironman 70.3 Switzerland and Ashleigh Gentle and Ben Kanute competing at WTS Leeds.