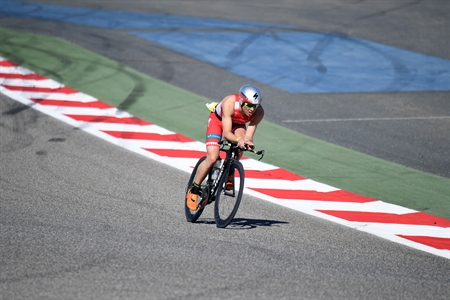 Javier Gomez will toe the starting line at WTS Yokohama this weekend. After taking the titles at Ironman 70.3 Dubai and WTS Abu Dhabi and just missing the podium at WTS Gold Coast, the five-time ITU world champion returns to a race where he has seen podium success in the past. He has won the race two successive times, and also has two silvers and one bronze under his belt.

Gomez will be racing against fellow Spaniard and current world champion Mario Mola, who he pipped in a sprint finish here in 2014. Gomez then went on to defend his title with another sprint finish in 2015, and only skipped Yokohama last year due to Olympic preparations.

“I had some good performances in the past in Yokohama,” he says. “I have good memories and I hope I will add some extra ones to my records this weekend.”

Meanwhile, Holly Lawrence builds upon her success at last weekend’s Ironman 70.3 St. George by racing Ironman 70.3 Santa Rosa. The race is a revamped version of the former Ironman 70.3 Vineman, which she won last year.

Tough battles for Taylor-Brown and Lawrence.

The Bahrain Victorious 13 toughed it out to stay in the money for this weekend’s races in the USA.