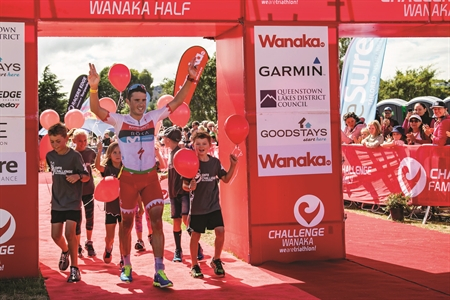 Javier Gomez made a emphatic start to his 2018 season, taking the Challenge Wanaka title over the half-iron distance with a new course record. His time of 3:57:27 knocked 20 minutes off the previous record that had stood for six years.

The eight-time world champion hailing from Spain had stayed in the lead group for most of the 1.9-kilometer swim, 90-kilometer bike ride, and 21-kilometer run through the scenic yet challenging terrain of New Zealand’s South Island. Racing against a quality field that included former race winners and local favorites, Gomez bided his time then put in a surge just past the halfway mark of the run to take him to the front of the race. He crossed the finish line 17 seconds ahead of his nearest rival Braden Currie, who was the previous course record holder.

Gomez said, “Braden put a lot of pressure on me and I had to run way faster than expected but I was very happy with how my fitness is… It was a really tough day; I had to give absolutely everything to win. I really enjoyed it, it was a great course and a great day and thanks everyone for the support out there.”

He concluded, “I felt better than I expected at this time of the year. It’s always nice to start the season winning.”

This bodes well for his major goals to defend his Ironman 70.3 world title and his first assault on the Ironman World Championship in Kona, Hawaii.