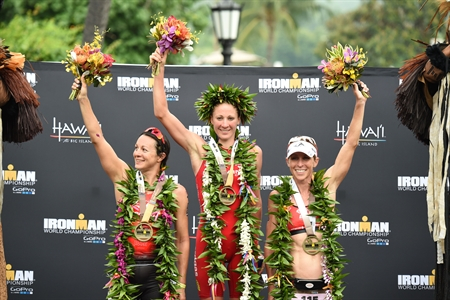 Complete domination was the name of the game as Jan Frodeno and Daniela Ryf claimed their leafy crowns at the Ironman World Championship after leading all day. The pre-race favorites lived up to expectations to deliver devastating performances that left competitors in their wake.

Both athletes carry the distinction of being the first athletes to hold the Ironman World Championship, Ironman 70.3 World Championship, and Ironman European Championship titles simultaneously. It is commonly considered a challenging feat to stay strong through the latter half of the racing season and do well at all three of them, let alone win them all.

Frodeno makes history as the first Olympic gold medalist to win in Hawaii. After a successful career racing Olympic distance in the ITU, he transitioned to ironman racing last year and quickly established himself as a force to be reckoned with as he blended his top-end speed with gritty endurance. He has not been off the top step on the podium since last year’s third-place finish in Kona.

After rising third out of the water at Kailua Bay, Frodeno made a rapid transition to get onto the bike course first. The lead on the bike was contested heatedly in the first few miles, with defending champion Sebastian Kienle only one minute behind from the swim and riding to join his fellow German in front on the Queen Ka’ahumanu Highway. Last year’s runner-up Ben Hoffman attempted to break away to the front going into the turnaround at Hawi, but they went after him. Frodeno took the front position in the final few miles and entered the run course with a 30-second lead. That gap only continued to grow, and he made the final turn onto Ali’i Drive uncontested. He walked through the last few meters of the finish chute, savoring the moment. His wife, Olympic gold medalist Emma Snowsill, met him at the finish line.

“Besides this and the Olympic title, I think nothing else matters. I’ve said it often, this is the Wimbledon of our sport,” he said. “I had good run form but it was brutal.”

Ryf also hails from an ITU background and represented Switzerland in two Olympic Games. She rose to long-course acclaim last year when she raced and won eight times in the span of four months, only bowing to last year’s Ironman world champion. She has been undefeated since then and has extended her winning streak in convincing fashion.

The Swiss Miss established a lead on the bike relatively early, overtaking Great Britain’s Jodie Swallow who had gapped the women by one minute out of the water. Fellow Swiss Caroline Steffen also rode up and the three pushed the pace through the first half of the bike leg. Ryf rode a flat tire to the dismount line, coming in seven minutes ahead of Swallow. Running like a machine, the two-time Ironman 70.3 world champion seemed unaffected by the punishingly hot conditions and built an insurmountable 13-minute lead. The calm facade only cracked in the closing few hundred meters as she allowed herself to celebrate toward the finish line.

“It was such a hard day. Everything went perfect,” she said. “I’m so happy I could put it together in such an amazing atmosphere. I have to thank my coach Brett Sutton, too. Two years ago no one knew me, and now he made me a double world champion.”

Despite an appeal to their goodwill earlier this week, the capricious island gods took their share of casualties. Swallow dropped out halfway through the marathon, Paul Ambrose exited the race early after two crashes on the bike, while Luke Bell fell once again to heat stroke.

Team manager Chris McCormack is all too familiar with the highs of winning as well as the lows of defeat and DNF at this race.

“It was a brutal day out there, some came through and conquered the conditions but it also took a lot of casualties today.

“Jan and Daniela were simply superb today and have been all season. This is just reward for their impeccable preparation and committment.

“Everyone on the team put it all on the line today and that’s what it’s about.”