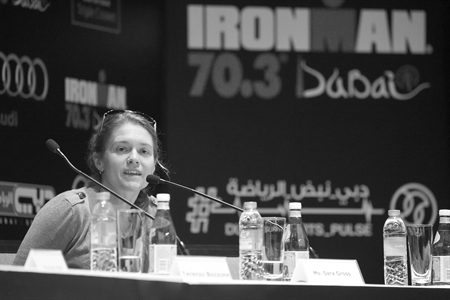 My recent trip to Dubai

I arrived in Dubai on a Tuesday evening. Derek, our team manager for Bahrain Endurance informed me that I had a 6.30am swim date with junior team member Abdullah Attiya. My body thought it was morning so I went to the gym at 10pm, did some computer work, napped from 4-6am and headed to the pool. I met Abdullah (a very common name) or “Abs” as he has been aptly dubbed by his teammates and we swam 3k. Then we went to the Souk next door for a Jugo Juice.

Sipping a well-known American-branded smoothie surrounded by shops that smell of incense where men from Pakistan sell Iranian carpets while the prayer call bleats off five times a day pretty much sums up Dubai in my mind. Abs and I talked about his training and life as a triathlete in Bahrain.

Dubai, for all intents and purposes is a “normal” place. In fact, it is often compared to Miami. The city stands out, not for it’s Islamic religion and culture, but for it’s opulence. Our hotel housed a 25m 6-lane pool and a gym better than some of our National Training Centres in Canada. Home to a community that is truly international in every sense, you can find men in dishdashes and women in shaylahs dining with people from Europe, Asia, Africa and North America. It is a true culture mishmash.

His Highness with the Long Name

Do they really need all those names? And what do they mean? “His Highness” and “Shaikh” are both titles denoting position in society. Nasser is the Prince’s first name, “bin” or “ibn” means son of and so Hamad is his father’s name. Al Khalifa is the family name.

I met His Highness briefly. He seemed like a nice man. He didn’t have Prince tattooed on his forehead so there was no way to distinguish him from the other competitors but for the cameras and the small crowd around him.

In the Middle East, sporting events are sometimes made possible by corporate sponsors but more often by individual benefactors, like a Sheikh. On several occasions while I lived there, a Sheikh would decide he wanted to hold a race, a running race or a bike time trial or a triathlon. On these occasions, there was prize money on offer. Almost always equally for men and women. I made some real money in the early years because of this and it allowed me to develop as an athlete.

If we are to explore the current state of triathlon in the UAE and Bahrain, we won’t look too far before we find the name, long or short version, of Shaikh Nasser. The opportunities that have become available because of His Highness are on every level. From support through the Bahrain Endurance team, to the development team, huge prize purses and the existence of races that otherwise would not be there, His Highness is behind it.

So why would someone throw so much money at a minority sport with no chance of return on his investment? I would love to ask him that question. My impression is that he loves it. Plain and simple.

While I was there, I made an effort to speak to some Arab Muslim women who do triathlon. I am interested in the interchange between sport, religion and culture and how these things function personally for women.

As suspected, there are as many reasons and motivations to do triathlon among Arab Muslim women as there are women themselves. What I wasn’t expecting is the wide range of experiences amongst these women in terms of access to training and racing. For example, I met one woman from Saudi Arabia who did not want to go on camera for fear of having her passport taken from her for participating in a sporting event.  On the other extreme, I met a woman from Bahrain who works for Ironman, does not wear a hijab and even enjoys a glass of wine from time to time. So many voices.

When I spoke to Suad Abdulla, the Emirati woman who started the first women’s running group in Dubai, she said something that really landed. Suad single-handedly inspired a large group of local women to overcome cultural barriers and get out and run together. Her secret? She herself is a local. That is what it takes to inspire, make change and move things forward. A leader who is willing to stand up within her own environment, take charge and do the right thing.

As I write I am on my way back to the Middle East. This time, I am going to Abu Dhabi to watch the World Cup Series race and support my teammates who are racing in the (interestingly named) “Maxi” distance the morning of the ITU race. From there, I am headed to Bahrain to train for a week, meet more local athletes, women, kids, and development team members so I can learn more about how triathlon is effecting people in Middle East.

And the story continues…