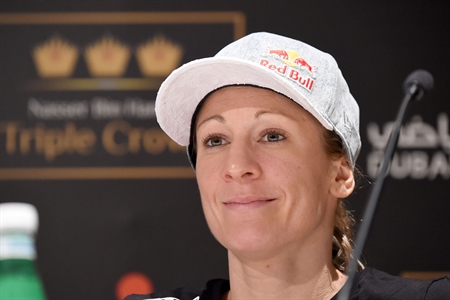 Ryf after three-peat and Cunnama redemption

Ryf defended her title in Rapperswil last year, extending the streak of Swiss champions at that race since 2010. After winning the first race of the Nasser Bin Hamad Triple Crown in January this year, she took a break for school then returned to serious training in April.

“I really like the hilly, technical, and stunning course in Rapperswil,” she says. “I’m still in the build up of my form for the summer, but it will be a good time to do some race practice. I’ve had ten days in the altitude in the Kempinski St.Moritz with my coach Brett Sutton, which gave me a little boost. Most of the training in April and May I’ve done by myself, so it was a nice change to be back training with a group again.”

Cunnama is back on track at Ironman France after cramping derailed him in his quest to qualify for Kona at Ironman South Africa, forcing a DNF on the run. Now fit and injury free, the South African hopes to prove himself on the hills of Nice. A veteran of the French Alpine triathlon races such as Embrunman, he knows he has a fighting chance at a win. “Looking forward to some great races in the coming months. And I’d far rather start a season badly and end well, than vice versa.”