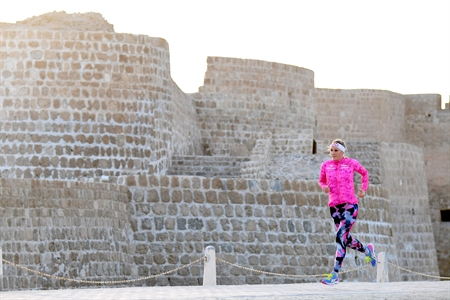 Expect fiery racing this weekend as Bahrain Endurance athletes are set to scorch the courses in Bahrain and Thailand.

Daniela Ryf and Javier Gomez will attempt to make history as dual contenders for the Nasser Bin Hamad Triple Crown, with the final of three races in the series at the Ironman 70.3 Middle East Championship in Bahrain. Having both won Ironman 70.3 Dubai and the Ironman 70.3 World Championship, taking the crown in this race will entitle both of them to the bonus pot of USD $1 million each.

While Ryf last took this honor in 2015 as the first Triple Crown winner, this will be Gomez’s first chance to match the achievement. He says, “I’m very excited to race Bahrain. It will be my last race of this long season and I have an incredible opportunity of being the first man ever winning the Triple Crown. I have trained a lot for this race and hope to have a good one on Saturday. It’s been a great year and it would be a dream to finish it winning the Triple Crown, so I’ll try my best to make it happen!”

Gomez will have fierce competition at the starting line, including defending champion Terenzo Bozzone. He is in amazing form, only getting faster as he backs up from winning Ironman 70.3 Los Cabos and taking second at the Island House Triathlon in a split-second sprint finish against in-form short-course specialists.

Bozzone says, “I am going to try and defend my title from last year but Javier Gomez has extra incentive to take that number one spot fighting for the 1 million dollar bonus.”

Fredrik Croneborg also will be hungry for a positive result after a disappointing finish at Ironman Malaysia to end his year well, while David Plese calls Bahrain home so he will be keen to do well on home turf.

Ryf will face off against teammate Holly Lawrence, who placed third at the Island House Triathlon and will be racing in Bahrain for the first time.

While not on the start lists, Jan Frodeno and Alistair Brownlee will also be present in Bahrain to support their teammates and His Highness Shaikh Nasser Bin Hamad’s endurance vision for the kingdom.

Meanwhile, Brent McMahon is backing up from a speedy performance at Ironman Arizona to end his season at the Ironman 70.3 Thailand in Phuket. He says, “Coming off Ironman Arizona I’m looking forward to finishing off my season somewhere warm and tropical. The fitness is there, so I’ll give it one last whirl for the season.”