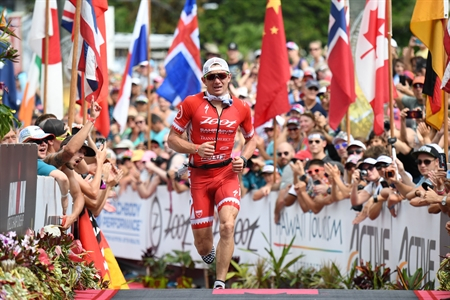 The Bahrain Endurance 13 will fly across three formats this weekend.

The Bahrain Endurance 13 racing red will fly across three formats this weekend. Javier Gomez is set for World Triathlon Series Hamburg, while Holly Lawrence races at Ironman 70.3 Racine and Ben Hoffman gets some offroad action at XTERRA Beaver Creek.

Gomez came in second at last year’s edition of the Hamburg race, barely edged out by France’s Vincent Luis in the final 300 meters. The five-time world champion says, “My training program is focused on longer distance races, but I think that racing a sprint distance now will be a good training for the intensity which will be good for other goals I am aiming for this season.”

After a string of dominating performances in the spring, Lawrence has been champing at the bit as her teammates raced around the world the past weeks. The reigning world champion over the 70.3 distance seeks to continue her winning streak this weekend in Wisconsin. She says, “I always feel like I’m missing out when watching other events the weekends I’m not racing, so I’m excited to go out and put in the final effort before the World Championships.”

Hoffman breaks up his build toward the Ironman World Championship with a bid at the XTERRA Beaver Creek title. He says, “I love switching things up a little and racing some Xterra every year, so it will be great to go head-to-head with some of the best offroad guys this weekend in Beaver Creek. I’ve been building the fitness back for the second half of the season after a little break, and I’m excited to ‘bust the rust’ and get racing again!” The full distance athlete is also an avid cross triathlon athlete and is one of the few and fastest to race both the Ironman World Championship and the XTERRA World Championship back-to-back. He adds, “This will serve to qualify me for Maui later this year as well, and I hope to be able to defend my Kona-Maui double title once again.”