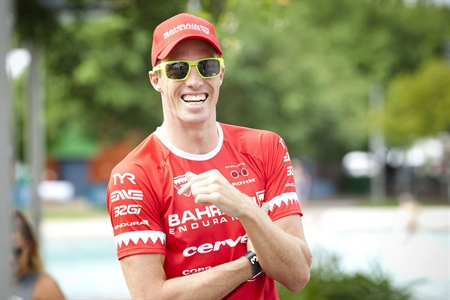 Leading out of the water with a three-minute lead, the Swiss speedster kept the pedal to the metal, outsplitting British long-distance duathlon world champion and former pro cyclist Emma Pooley on the bike. When Ryf broke the tape, she had increased her lead to the rest of the women’s field by 14 minutes.

The double world champion has been undefeated over the Ironman 70.3 distance for three years. Her focus now is on defending her title at Ironman Frankfurt in July and extending her winning streak in Ironman racing.

James Cunnama took a silver medal at Ironman France. The South African took the lead on the bike leg and had a six-minute lead as he started the run. It took the day’s fastest marathon time for Spain’s Victor del Corral to move into the lead, but Cunnama fought for every inch to the finish. The two men were separated by only 35 seconds at the finish.

With his podium finish, Cunnama has clinched enough points to qualify for the Ironman World Championship in October. His partner Jodie Swallow will now attempt to do the same in Ironman Cairns this week.

Meanwhile, David Plese raced the Keszthely Triathlon in Hungary over the weekend. He took second place over the half distance event, building fitness and confidence leading into Ironman Austria.