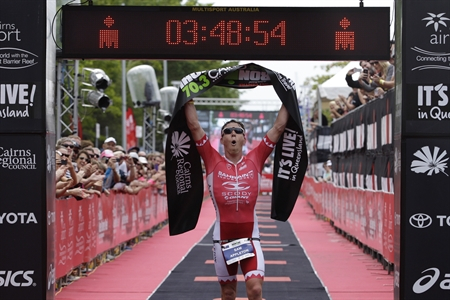 A weekend of highs and lows for the Bahrain ENDURANCE Team

The weekend for the Bahrain ENDURANCE Team was a rollercoaster of highs and lows at the races.

At Challenge Denmark, team manager Chris McCormack was tasked by Luc van Lierde and Thomas Hellriegel to do the half-marathon anchor leg for their legends relay team. They finished with a strong fifth place. McCormack said, “They were two of my childhood heroes growing up and both athletes I wanted to emulate in my own career. It was a real honor to bring the run in on this relay team!”

Swallow took fifth in the women’s race. She said, “My day was terrible. I just couldn’t breathe the whole day. Obviously I led out the swim but it just took so much out of me to push on. So I did a lot of walking, a lot of soul-searching, and I ended up fifth which is pretty rubbish for me, but I finished.”

Paul Ambrose was seventh and felt out of depth in the altitude after spending most of his time after Ironman Australia at sea level. He said, “Usually I move up into the front group or in contention of the race, and this time I was pretty far back. It was just an individual time trial today, I just stayed 6th or 7th all day and the guys up front were just too quick today. Didn’t do anything special, but I feel like I got a good training day out of it.”

Hoffman put a positive spin on his fifth-place finish. He said, “It was nice to race here at home in Boulder. Warm day out there. I pushed really hard on the bike, I felt like I had a good ride and the run was just kind of mediocre I wasn’t able to go with the top guys. But all in all, given where my fitness is now at this time of year, came fifth place, I’m very happy with it.”

Sam Appleton and Caroline Steffen took wins at Ironman 70.3 Cairns. Appleton swam with the leaders, then recorded the fastest bike and run splits of the day to trounce his own coach Tim Reed and multiple Ironman champion Craig Alexander for the win. In similar fashion, Steffen produced the fastest bike and run splits among the women to stand head and shoulders above Annabel Luxford and Katy Duffield.

Meanwhile, His Highness Shaikh Nasser Bin Hamad Al Khalifa just narrowly missed the 10-hour mark in the Ironman distance, but set a new personal record and a 7th place finish in his division. The team’s hopes are high he will secure a slot for the Ironman World Championship at the rolldown ceremony.

James Cunnama racing the Ironman pulled out on the run due to medical issues. He said, “I ended up doing a marathon in the medical tent rather than on the road. Very disappointed as I was in good shape for this one, but that’s sport. Of course this means back to the drawing board for the season plans, but will sit down with the coach and work out where we go from here.”

The weekend ended on a high note in Europe with Javier Gomez’s win at Ironman 70.3 Staffordshire. Gomez swam well but played conservative on the bike, which paid off when he took the lead on the run. He said, “Tough bike course, pretty tough run course as well, with all the rain yesterday all the dirt tracks were muddy and pretty slippery, and then you had this hill going up and down so it was pretty interesting. I was saving a little bit for the run. I did the first lap quite fast just to take the lead, and then I controlled the pace a bit more because it’s been a tough week of training for me so it was better to be a bit conservative.”

Domenico Passuello’s 3rd place at Ironman 70.3 Italy wrapped up the racing for the Bahrain ENDURANCE Team. The podium spot secured with the race’s best bike split bodes well for his campaign at Ironman France in two weeks’ time.